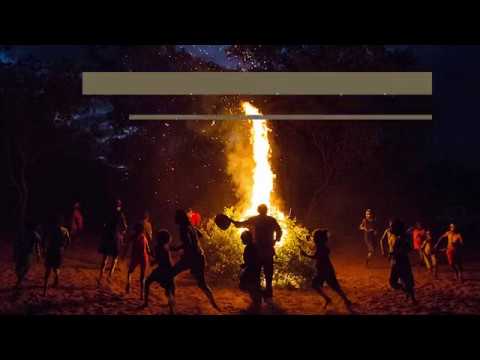 Is it an indigenous increase ceremony?

Is it an Aboriginal family entertainment?

Is it a means of teaching indigenous ecological management?

It’s all of the above, in part.

Dow hasn’t been performed for about 40 years but three men who experienced Dow as children have resurrected this spectacular performance.

Despite vast distances, they came together at the tiny outstation of Mobarn, also known as Bluewater, to breathe life back into Dow.

The idea to bring back Dow arose at an Indigenous rangers meeting at Bulman when Otto spoke of a special ceremony or “game” as he and Robert like to call it.

They spoke of Dow being performed in the mid dry season as the time for traditional early burning finishes and fires in the windy mid dry can travel many kilometres for many days. It is a time to take care with fire. A time to carefully undertake planned traditional burning to prevent destructive late dry season wildfire.

The Dow begins with children walking and then running around a spectacular bonfire erupting sparks like a volcano in the early darkness after sunset.

These children are fish. From beyond the circle of firelight a masked figure dashes out of the darkness to grab the children who are laid down in lines and taken out of the “game”. As they lie on the ground, the children wiggle their legs to mimic the tails of fish.

The mask-wearing “catcher” represents an owl on a mission to catch fish. Each of the men take it in turns to ham up the “debil debil” characterisation and continue catching fish until they are all laid down. The children who are last to be caught are praised as “winners”.

When the fish are dealt with, the children stand and become trees where the native sugarbag bees have their nests. They make the sounds of the bees within the nests and sway like trees in the wind. The catcher now bring out a stone axe and when it is swung the trees all fall down.

The catcher mimes cutting open the nests and taking out the sugarbag to place it into a dilly bag. He is joined by a man, carrying a spear and woomera.

When the honey is harvested the children stand and become birds — chattering family groups of grey crowned babblers. They rush to trees at one point and embrace trees at another.

Otto Bulmaniya tells the group the performance is to remind everyone to look after fire so the flames of the dry season are kept low and the flowers which sugarbag bees feed upon are not damaged.

It is hoped this special ceremony will bring plenty of fish and sugarbag.