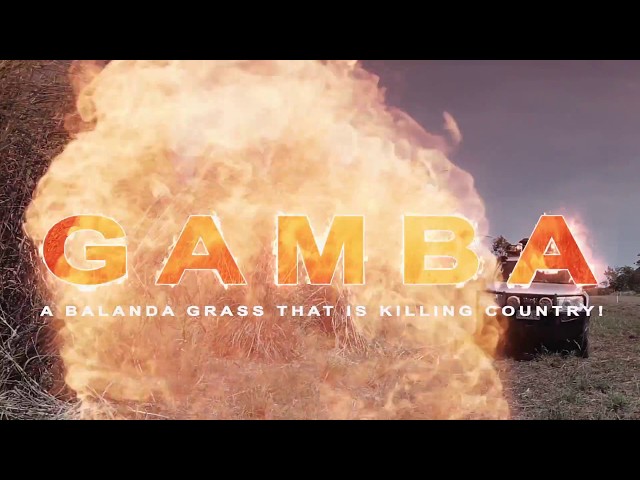 First introduced as stock feed several decades ago, Gamba grass is a damaging weed that has invaded large parts of the Northern Territory – and it’s threatening our country.

Our native plants are built for fire, but this highly-flammable weed fuels bushfires and burns so hot that it destroys our country’s most fire-prone native plants.

It’s become more prolific in the wider Darwin area – and so Mimal joined forces with Jawoyn Rangers and Bushfires NT with the help of Territory NRM to understand how we can help fight its spread.

Bushfires NT John Whatley showed the group how the weed spreads and takes over.

“Gamba grass can change the environment to the point where it kills trees and there’s nothing left but gamba grass,” John says.

“In the Coomalie Shire I’d have to say that everything we try to do is too little, too late. It’s taken over and it’s going to be here forever”.

Mimal Ranger Lyndon Lawrence says the experience of visiting Batchelor and watching the fires burn made him worried.

“From what I’ve seen here at Batchelor, Gamba creates big intense fires that kill everything, animals and trees,” Lyndon says.

“It it gets established on our country it will kill everything and we’ll have nothing. All the traditional owners will feel bad if this happens on our country.”

The rangers also visited Heytesbury Cattle Company’s Moolooloo Station to learn how to combat Gamba before it becomes unmanageable.

Former Mimal Ranger-coordinator Ben Lewis warns that fighting gamba is going to be a never-ending job.

But as he points out, gamba grass will keep on coming in to central Arnhem Land and only by community and rangers working together can it be stopped from destroying country as it is north of Pine Creek.

Mimal is focused on sharing information about the weed and warning people to watch out for gamba being carried into community through hay, in vehicles and from feral and herd animals.

The video on Gamba grass was funded through Territory NRM and the Federal Government’s National Landcare Program.

Spreading our wings with birds