Traditional owners in central Arnhem Land are calling for illegal visitors and poachers to be investigated and prosecuted, following an increase in brazen hunting and theft of stock and entry of sacred sites.

Mimal Land Management represents landowners in the area and says most recently a group of four poachers travelled and hunted around Mount Catt outstation, south-east of Bulman.

It’s illegal to travel on A­­­boriginal land without permission from traditional owners and a permit from the Northern Land Council, which has put a halt to recreational permits due to the coronavirus pandemic.

Traditional custodian Robert Redford said he stumbled onto the illegal hunters near his family’s outstation and when he politely asked them to leave, they told him they had permission from a traditional owner.

He offered to escort them to the right area, but they ignored his advice.

“I told them I’d take them back to show them the right place,” Mr Redford said.

“I told them good thing, to go back and, you know, go somewhere else.

“I’m worried they might go onto sacred site area and all that, you know, there’s a lot of sacred site here.”

Mount Catt is an area that holds many important ceremonial grounds, burial grounds and sacred sites.

Mr Redford’s worst fears were realised when he discovered tyre tracks at sacred sites the next day.

“People coming with no permission, you know they make me a little bit upset, like I’m really upset now,” he said.

Mimal Land Management has reported the incident to the Aboriginal Areas Protection Authority.

If found, the illegal visitors could face maximum penalties of up to a year in prison for unauthorised entry of a sacred site. 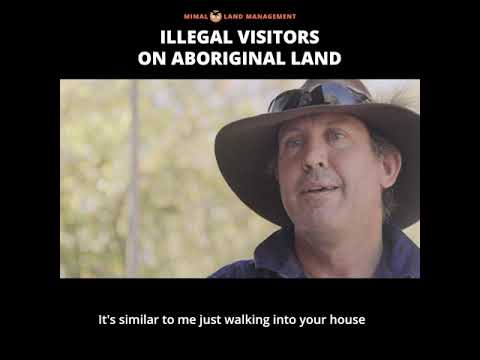 Mimal feral animal management coordinator Will Green says that’s not the only punishment the group could face, after they shot at least nine buffaloes, as well as some horses and donkeys.

“These guys blatantly ignored that fella (Robert Redford) and they’ve driven straight past him and out onto his country where they have proceeded to then blast away a lot of our animals in that area,” Mr Green said.

“They have left the rest of the body just out there in the bush to rot away.”

He says Mimal subcontracts buffalo mustering and game hunting in the area.

“So the poachers potentially have probably a couple of thousand dollars worth of animals on board their truck that should have been money coming back to the community,” Mr Green said.

“People are absolutely furious about this because again they’ve come onto the property without any permission and they’ve just gone and harvested these animals again without the permission.

“It’s similar to me walking into your house and helping myself to your kitchen bench or whatever.

“They’re very upset about this and feel very violated.”

The poachers and their activity has also been reported to the Northern Land Council and the Northern Territory police, who are currently investigating the matter.

Mimal Land Management chief executive officer Dominic Nicholls says this event is one of a number of similar incidents in recent years.

“This is no longer going to be tolerated - unless the laws they’re breaking are enforced people will keep illegally trespassing, hunting, stealing and disrespecting the land.”

Mimal Land Management says it’s looking forward to working with the Northern Territory Government on the rollout of new laws and regulations that give Indigenous rangers greater power to fine people acting illegally on Aboriginal lands.